The Kara River In Ogun State Dries Up! 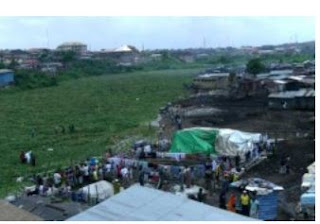 The popular Kara river In ogun state along the Lagos -Ibadan express way has just been confirmed dried off
Coolstories was there to witness the mystery occurrence gathering facts that it was real and the former abode of the river is now a solid ground with an unidentified plants already grown on it
We further went on by interrogating one of the residents there and he made us know that No one witnessed how it dried up,that they all just woke up to see that the water channel has been blocked
While on the other side of the water,which  water was still flowing freely has at last night has now turned to a place where everyone is gushing to feed their eyes on with the mystery occurrence….Environmentalist has hereby advised pple to stay off the seen as the channel may suddenly pop out again,Who knows?
Cool stories will give u more updates as we promise to follow up the story and it hereafter
Previous Post So Hilarious: Difference Between Male To Male & Female To Female Conversation On The Phone
Next Post Detailed Story of the Kara River in ogun state That dried up: