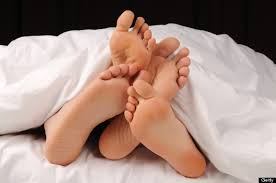 I had my first orgasm when I was 18 years old. Bit of a late learner I guess. I was sitting on my Mother’s bed one afternoon a few years ago, watching TV. She was folding laundry and I was supposed to be helping but instead I had turned on her television and sat on her bed watching some teen-trash show.

I remember that my little brother, who was probably about 3 years old, was playing on the carpet whilst my mum was folding towels and putting them in a closet. My brother was just pottering around, fiddling with bits and bobs on my Mum and Stepdad’s dresser. I wasn’t really paying attention or listening to either of them, my eyes were on the TV.

Suddenly I heard my Mum scold my little brother,
“You can’t have that!” She said.

I saw her snatch what looked like a colourful comic book of out his hands. Her face was a hot pink and she looked very flustered.

“It’s nothing,” She replied, looking embarrassed.

She opened her closet and quickly stuffed the tatty magazine inside.

For the rest of the day, I could think of nothing except my Mother’s reaction to whatever my little brother had found. I was so curious, and I was determined to know what she had hidden in her closet.

Later that evening, we were eating dinner at the table. I finished my food quickly, and excused myself under the pretence of having lots of homework to finish.

I ran up the stairs and into my room. I set some Maths books, pens and pencils out on my desk in an untidy clutter. I was planning on sneaking into my parents room, and figured that if they caught me I could pretend I was looking for a ruler as I had lost mine.

I crept out on to the landing way outside my parent’s room. I listened carefully to their actions downstairs. I could hear my Mum clinking the dishes in the sink and I could hear the noisy din of the TV.

Satisfied that they wouldn’t suspect anything, I pushed open the door to their bedroom. I walked quickly and quietly to my Mother’s closet and swung open the door. I rummaged around between the towels for a couple of moments before I found the tatty, slightly ripped magazine that had made my Mum blush furiously earlier that day.

Suddenly, I heard a creak on the stairs. Without thinking I shoved the magazine up my top and quickly closed the closet door. I walked carefully out on the landing and stared nervously down the stairs. Nobody was there. I put it down to paranoia and went back into my room, closing the door behind me.

I flipped through the pages before I found an article that caught my attention. I stared at a large image of a young woman in a tiny cheerleader skirt, bent over on all fours.

She had a penis in her mouth. I couldn’t see the man to who the penis belonged as he was out of the shot, but he was slim and tanned. Kneeling behind her was another man, equally slim and tanned, with his penis buried inside her pussy.

The girl was wearing a cheerleading whistle around her neck and the whistle was buried in her huge cleavage. She had no underwear on, and her breasts and pussy were completely exposed.