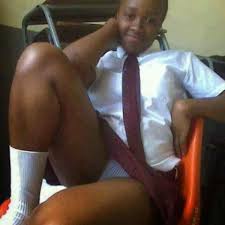 “I will be travelling abroad and I want you to follow
me. I can convince my father to help both of us” She
said with a sad face almost filled with tears.
“You say” I repeated after standing still for over a
minute without saying anything.
“I have told my daddy about you, and he said he
would love to see you. I am the only child, and he
always wants to make me happy” She said with tears
almost in her eyes “I don’t want to leave without you
by myside”. Have you ever seen the face of someone
that saw a ghost, my face was a clear illustration of
that type of face. I didn’t know what to say or how to
act.
“My Love say something please” She said as she held
my hands so tight.
“Okay, I will go to see him” I said with my hands and
feet both shaking. I knew I didn’t love or feel anything
for her, and all the reaction she was getting was
because I just dis-flowered her. I was in for a long
story, but I was always confident of handling it well.
On the agreed day, we went to her house after
lessons; I enjoyed the frenzy of a super air conditioned
car as we made way to their house. I saw a building
and I realized that truly all fingers are not equal. We
have Houses and we have Homes and theirs was a
perfect example of a home. I entered and sat on a
leather couch and was offered a drink so as to wait
for the father. He finally came, and behold I saw a
young man probably in his early or late forties.
“Are you her friend she told me about” He asked with
a smile.
“Yes sir” I replied while standing up to greet and was
already tensed about the next thing to follow.
“Are you her boyfriend” He asked
“No…Yes..emm.. No sir” I stammered
“Who is he”? The father asked her
“My boyfriend” She replied with a grin on her face. He
asked me series of questions and I did a job well done
of introducing myself to him and giving him a lengthy
description about myself while he listened with rapt
attention. After I concluded, he smiled and brought
some a good amount of money from his pocket…

pain and pleasure. I was no longer in charge, because
she had taken over. All I did was moan and responded
to all the style she brought. At a time, she became
vigorous and it was becoming more of pain than
pleasure. She continued at a point she started
moaning harder, vibrating and also she increased the
speed of the whole sex. It continued that way till she
became tired and came down. I was already sweating
big time despite the fan in the room.
“I love you baby” She said as she wrapped my hands
over me. I was even too tired to say anything. I was
already breathing too hard and I didn’t want her to
notice, so I decided to just nod my head and smile.
“Promise you will stop loving Blessing and focus on
me alone” She said.
“I promise” I said to her with a low voice. I could
see the excitement on her face, but it wasn’t my
business at that moment. I was tired and I needed to
go home. I forgot the purpose of attending the lesson
I paid for; instead of Jamb lesson, it became a fvck
lesson. I was already avoiding blessing with the
excuse of I needed to focus on my studies. Instead, I
was highly focused on her friend. We kept fvcking
away our time especially our last day in the lesson. I
asked Nikky to wait for me in the afternoon
somewhere I could see her. I fvcked Blessing in the
morning and attended to Nikky all through the
afternoon. It was memory so fresh and clean. I
enjoyed the fvcking experience till the Jamb exam day
came to me like a theif in the night. Nikky helped me
and gave me the contact of the person that she
employed to help her send answers to her phone and
I willingly collected and made the necessary calls.
On the day of the exam, I already knew the system of
operation and I knew what I needed to do to scale
through. Daddy drove me to the exam center because
it needed a little travelling.
“I can’t see you revising your books” Daddy queried
“I already know all of them, don’t worry I will be fine”
I said with uttermost confidence”. He smiled and
shook his head, and few minutes later we were at the
exam venue. I quickly left daddy at the car park and
went down to locate my center. I reached there and
saw some guys hanging around.
“You guys in this hall” I asked them
“Yes” One of them replied
“Any chips” I asked. They looked at me surprised and
also with intimidation but I was not moved one bit.
“You be police”? One of the asked “Which kain
question be that” Another added. I laughed and asked
them not to be scared, that I was also writing the
exam. They wouldn’t buy the idea, so I decided to
show them my exam slip and we blended
immediately. Inside the hall, I heard more of vibrations
from phones than voices from people. It didn’t take
much time before our invigilator started going around
with a black nylon
“Oya where you own”? She asked me
“Where what Ma”? I asked confused
“So you wan copy, but you don’t want to spend”? She
said in a low voice “Come on, put one thousn naira
inside here”. As soon as she mentioned a Thousand
Naira, there was a mild noise in the hall and the
bargaining began. We finally settled for 500 naira and
those that paid where given a special row while those
that didn’t stayed in a separate place. This was one
of the best exams I have written and I was so good to
go. I left the hall after writing and picked up my phone
and saw the answers sent by Nikky’s source.
Few weeks later, the results came out and I scored
232 and I proceeded to write the post Ume exams. I
had to prepare for these exams so it was a marathon
reading. I wrote the exams of the two universities and
cleared it straight up. I was admitted into the Federal
university at Awka and I was so good to go.

“Hello babe” I said, when I picked up my phone that
was ringing.
“How are you” Nikky asked me
“I am fine dear… What did you score in your exam”? I
asked her
“160” She said with an angry tone “What about you”?
She asked me
“165” I replied with an angry tone too. She showed
empathy and consoled me
“So will you still attend the lesson again” She asked
me
“Yes” I replied… Let me call you back” I said to her. I
quickly terminated the call and blocked her number
from my phone. I was making preparations and having
dreams about what the university life would be all
about. Then one evening, there was a knock on the
door…
“Pastor peter” My father yelled. Immediately I heard
his name, I knew I was in deep poo.He always saw
funny visions about me, and I wondered what he has
seen again this time around. After the exchange of
pleasantries,
“Is your boy around? Please call him” He said to my
father. I didn’t wait to be called, and I entered the
parlor already.
“I saw something about you, and it is not so good” He
said “You have done a lot of bad things since this
year and something bad is about to happen” He
continued. My dad was already staring at me like
someone that stole his money. I knew what those
eyes meant and I realized I was in for something
serious.
“I don’t want you to touch him sir” Pastor peter said
and I immediately breathed a heavy sigh of relief.
“But the lord wants something to be done to avert all
these” He continued
“Anything, I will do it” My father said with
enthusiasm… He opened his mouth and started
prophesying
“WHAT”?? I shouted during the middle of the prophesy