A Instagram Lady Sent Us A Mail @Classicpluz.com That She Was
Scammed By A Online Fashion Designer On IG Of 34,500 Naira,Here Is The Full Story Below 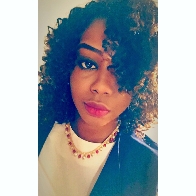 The world needs to know know that most of the people that
runs fashion Retail business on Intagram are mostly scammers
E.g (@Shopmaja) After Taking my 34,500( thirty four
thousand, Five hundred naira), they have refused to
send me my exact items and still refused to refund my
Money! Because I’m not a Celebrity! It happened that
on the 22nd of October 2016, I placed an order of 4
items in “Large” sizes through their website which
totaled to #34,500. The following Monday, I put a call
through to them informing them about the items I
ordered, and also confirming a receive date. Having
spoken to the customer care, I was informed my items
would be delivered to me during the course of that
week.
On the 28th of October which was a Friday, I received a
call from the delivery company and got my items
delivered to me.
I got home that evening and tried the items only for me
to realize that they came in a really small size, I
couldn’t even wear them.
I became furious, obviously they made a mistake with
my order after making me wait 6days, those items
didn’t look anything close to a Large size’. Immediately
I packed the items.
The following Monday 31st October, I put a call through
to them and told them the items were too small and I

couldn’t wear them. The lady I spoke with asked what
my size were, I told her a Large.
Immediately she started apologizing and said the size
chart on their website is a size smaller I.e (a normal
Large, was a medium on their website) please how is
that my business? It wasn’t stated that their sizes were
a size smaller. How was I supposed to know?just
Imagine the Rubbish!
After exchange of words, her response was ” we would
send you an exchange of the 3 items in a bigger size “
she said she would send the despatch person to come
pick it up from my location but I would have to pay! My
response was, no problem.
Just have the guy Come pick it. I kept calling and
calling , nobody came. No one was answering either . It
was around 5 after close of business, I got a call from
the despatch. He picked up the items and left.
I then called the customer care again to ask when I
should be expecting the exchange items, she stated
2wks max, bcos they would have to sew another one ,
just imagine! I said ok! No problem . On Wednesday 9th
November, I called to ask again when the items would
be coming because it was the second week already and
not a call from them.
She responded, the items were ready that they would
deliver it the following day, but I’ll have to pay again for
delivery. Just Imagine! All these while I have been
spending my money on their incompetence! I said no
problem, I’ll pay just send the items!
Yesterday, the items came! I was happy. at least I was
going to be free from their issues. Only for me to get
home and realize the items they sent back were the
SAME items they sent to me 2 weeks ago! They had
loosened the sides with blade and sewed back!
The blade traces were so obvious. I was furious. They
said they were going to send an exchange ( a bigger
size) why the hell did they send the same loosened
items? Those were my thoughts as I became even more
furious. The outfits still didn’t fit. So they lied and
deceived me after making me wait 10 days!!! Can you
imagine the insult? ! That was the height!
How dare you say you would send a bigger size and
then use blade to adjust the old items , resew it , and
then send back! I have never been this insulted!
Immediately, I sent a message and gave them an
utimatum of 24hours to refund my Money and send the
despatch to Come pick up their trash cut and sew!

They asked that I return the items to their office first,
how am I supposed to know your office when i have
been dealing with you via your Instagram page, your
online website and a despatch company ! I didn’t even
pick the items from your office. How dare you ask me to
bring them to your office! I don’t even know you! I only
know your Instagram and website.
Imagine the SCAM! No one has responded to me on that
till this minute, that’s why I’m calling them out!
@SHOPMAJU you are Unprofessional, Incompetent and
a Thief!! You take people’s money and then send stupid
products !! You use Celebrities on your website to
Deceive and lure people, then give out substandard
items!! If you don’t refund my Money in 24hours, God
will Collect 70×7 times what you have taken from Me!
God will give you pain as you have given me pain since
October 22nd!
If I Can’t Punish you for this, GOD will Punish you and
your entire Scam Team! (AMEN)

This are the screenshots she attached to the post 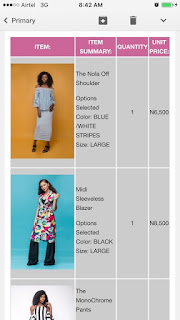 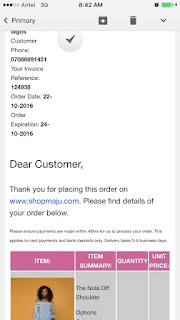 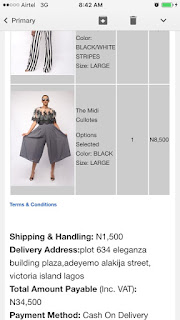 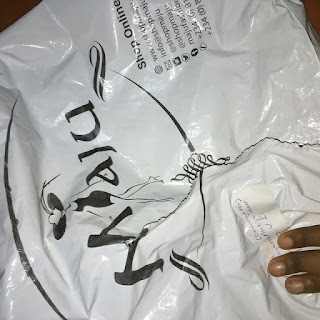 Lol,well that’s what she wrote in the email I received and also the pictures,what’s your view on this,kindly comment below and share so that other people would know that this people are unproffessionals,thanks for your time.