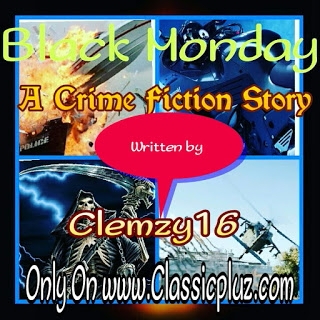 Margaret attempted to shoot her supposed boyfriend
who suddenly turned an enemy, but
instead, she got
shot and died on the spot.
The tension had drastically risen and the battle line
was drawn. The rest of the Gang immediately pulled
out their guns and began firing shots toward Jude
who took to his heels after killing his estranged
girlfriend. Eventually, Jude cheated death after
escaping out from the church auditorium but not
without the support of the church wooden benches
which he had used as cover in order to shield himself
from bullets penetrating his body.
The General was very mad upon experiencing the
drama that had just played before his very eyes; as
he then gazed toward lifeless Margaret on the floor,
and furiously ordered the Gang members to chase
after Jude and bring back his body to him, either dead
or alive.
The squad were spontaneously gingered with a feeling
of adrenaline as they made for the kill by trouping out
of the auditorium simultaneously. They rushed to
occupy two of their parked ‘BMW’ vehicles positioned
at the church compound and began following Jude
who had long zoomed off with his Range Rover Sport.
Though, Jude was driving at top speed, but his Gang
members were able to catch up with him as the Car
Stering was handled by Spaco and Croucher who were
their Baddest and Roughest drivers in the game. As
soon as they were driving past an Estate area, Bishop,
Small, and Zoe thrust out their heads from the car
windows and continued shooting the Range Rover
from a close range while Lucious and Ufuoma
gingered them with praise until their guns were
completely emptied with bullets.
“Poo!!” Spaco muttered loudly with frustration and
then hit his hand on the stering upon realizing that
they were out of bullets.
“What do we do now?” Ufuoma asked puzzled while

sounding slightly above her voice.
“Don’t worry! I know exactly what to do.” Spaco
assured. He then sped rapidly and bumped into the
Range Rover from behind, thereby, distracting Jude
from maintaining a particular lane. His plan was to
ensure that Jude loses control of the stering and
probably somersault.
However, Spaco had his plans poorly calculated as
Jude, once again drove faster above limit while they
followed suit; But then, he halted shortly, and Spaco
who was accelerating at top speed could no longer
control the motion and came crashing into the Range
Rover Sport with full force.
Spaco immediately passed away from the sudden
accident that practically damaged the car beyond
repair and later caught up in flames, burning them
beyond recognition. He died alongside Small, Lucious
and Ufuoma who were his occupants.
Croucher soon drove toward the scene of the accident
and met his Gang mates dead. His thinking faculty
could barely reason the next course of action to
follow, then he caught a glimpse of Jude sticking out
his middle finger in a bid to mock him and then sped
off again.
The chase continued and Jude practically led them to
his house whilst having a sinister plan up his sleeve.
As soon as Jude reached his mansion house, he came
down from his Range Rover vehicle which was also
badly damaged and remotely opened his gate without
closing it. Sooner had he entered his apartment than
the Gang arrived; the trio stepped out of their own car
and made for the boot of the vehicle where several
sophisticated guns were kept. Croucher, Bishop and
Zoe gallantly entered into the compound carrying
assorted guns of different kind and were fully prepared
to unleash their rage at any living creature that
crosses their path.
Meanwhile, Jude diplomatically barged into his
sitting-room as though nothing had happened and
met Elohor sprawled on the couch watching a
Noolywood drama on Africa Magic.
“Honey! Since you left the house, I’ve been very
uncomfortable. There’s something I’ve been meaning
to tell you.” Elo stood up quickly and said; while Jude
acted indifferent but picked the remote instead and
switched off the television.
“I forbid you to speak! I know you’re working with the
police. Let’s leave this place now, our lives are
endangered.” Jude blurted and started dragging Elo up
toward the staircase and into his inner chamber.
“Did you just say endangered?” Elo asked as fear had
suddenly developed within her.
“C’mon… Let’s go. There’s no time to waste!” Jude
reiterated while raising his voice.
They finally reached his inner room but the whole
place was dark. Jude reached for the switch, and
suddenly the room became illuminated. The room was

almost empty, but had a nice furniture, together with
a computer system and different monitor mounted on
a desk. Jude then pressed a key on the computer and
the whole monitor became live. It appeared that he
had security cameras stationed at every corner of the
house which reflected on the computer screen.
Jude proceeded to press another key on the computer
and his sitting room was immediately shown.
Croucher, Bishop and Zoe were captured in the parlour
carrying their guns and gazing around wondering
where Jude had entered. On seeing them, Elo
immediately covered her mouth in shock and prayed
inwardly that the ground could just open and swallow
her.
“Do not panic! I have the situation under control.”
Jude assured her and then walked away to an
extreme corner of the room where a big red button
was inside an emergency glass. He impatiently broke
the glass open with a pistol gun and pressed the
button. Just then, a chemical induced gas started
diffusing into his sitting-room from a connected
channel, and – in no time, Croucher, Bishop and Zoe
started gasping for breath. Their predicament lingered
long enough until they couldn’t battle to survive
anymore and finally passed out dead.
Moments later, Jude and Elo came out of the house
covering a chemical protective mask, but not after
Jude had chopped off Croucher’s head and carried one
of their gun, as himself and Elo entered his Toyota
Camry car and headed back to St. Clement Believers’
Church to pay ‘General’ a courtesy visit…

**To Be Continued Shortly**